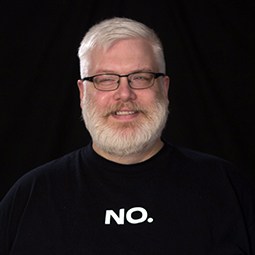 Ross Swanner defies the saying, “He knows a little bit about a lot” – that’s because he knows a lot about a lot. In a crowded room, you will see him sitting quietly with an Orson Welles-isque stature, but rest assured he’s taking mental notes of what is going on around him filing it away for great conversations later.

Besides the company founders, Ross is the most tenured employee at Hawk SCADA having joined its parent company, Innovative Broadcast Services, a year after incorporation. His forte is broadcast engineering and has a strong connection with Mississippi State, where he majored in Electrical Engineering and has been involved with the MSU radio network for over two decades.

If you’re grilling out and want to invite Ross, put on some Pink Floyd and then move over and let him handle the grilling as it’s one of his favorite hobbies — along with watching old movies, listening to great music and general boondoggling. You probably can’t serve anything he won’t try at least once (since he’s had a foie gras milkshake before) except for milk, canned spinach, and overcooked meat.

With Ross’ strong background in broadcasting, it’s no wonder his two favorite work projects have been studio buildouts: Apex Broadcasting in Destin (hard work but fantastic view) and Cumulus’ new studio in Columbus, MS (read more about this one on our Projects page). Two projects, we are sure, that has helped Ross formulate his best piece of career advice: never assume a best-case scenario when budgeting your time.